I opened up a cupboard the other day and several items literally jumped out at me and fell on the floor. It wasn’t so much overfilled but I’d just kept putting in cups, books and anything that needed to be hidden from guests in randomly until they didn’t fit on the shelves anymore.

Truthfully there’s not much difference in the before and after picture unless you look closely. I feel the cupboard is tidier now even if I need to find a home for the plastic bag of party items and get rid of the cooking books, in the back of my mind I can hear the voice of ‘you might need them some day’.

I moved the cups and glasses around so they were grouped together and sitting nicely. Do I need these extra cups and glasses? I’m really not sure, I mean they are super helpful when we have lots of guests which happens a couple of times a year but I wonder if having the extra space from throwing them or putting them up the loft/in the shed would come in handy for stuff that gets used more often.

I pulled out all of the not used for five years cooking books and threw away any loose recipes. It hurt to see those poor recipe scraps go. 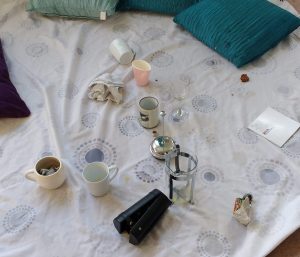 In order to rearrange the cupboard I let the monster have a ‘tea party’ which resulted in a clothes change and my having to load the dishwasher rather quickly. She had such great fun and it was a pleasure to watch her create chaos. You’ll just have to imagine the soppy grin on my face.

My cupboard feels tidier and a little more organised. And now I have three more jobs to put on the list of To Do’s…

Please note that I am unfortunately not an expert cleaner, organiser or financial wizz. Please always do your own research.

Squirreling my way to financial freedom

One family's journey towards Financial Independence and Happiness

Living the good life on a budget.

A blog on early retirement and philosophical living in the UK.

Getting the house and finances organised...slowly

She Picks Up Pennies

Living a More Purposeful Life One Cent at a Time

Memorial benches & the stories of the people they commemorate

A tribute to the people remembered by memorial benches

The Four Horsemen of the Middle Aged Apocalypse

Back on the road again

Frugal travellers with a blue campervan

The Simple Path to Wealth

You can escape to financial freedom...